Thank you for spending the "Crescendo" season with us! From seven musicians in Stravinsky's "Soldier's Tale" to almost 150 voices and instruments coming together for Beethoven's truly joyful Symphony #9, it has been a season to remember! With all the changes, surprises, and wonderful musical memories of this past year, we are truly grateful for the health and strength of our communities on and off stage, and for the support you have shown to our orchestra. We wish everyone a peaceful summer, and look forward to sharing details of our 2022-2023 concert season soon! 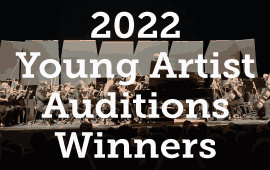 The North State Symphony is happy to announce the results of the 2022 Young Artist Auditions. The YAA honors young musicians in the North State, both instrumental and vocal. The competition has two divisions, High School and College/University.

The winner of the High School Division was James Johnston, violin, of Anderson. He played "Introduction of Rondo Capriccioso" by Saint-Saëns. James is a sophomore at Shasta View Academy. He wins a cash prize and the opportunity to perform with the North State Symphony in the 2022-23 concert season.

Second prize in the High School Division was won by Allie Braito, piano, of Cottonwood. Allie performed Mozart's Piano Concerto No. 20 in D minor, Mvt. 1. She wins a cash prize.

The winner of the College/University Division was Sarah Harris, voice, a sophomore at Shasta College. She performed "Les Oiseauxdan la charmille" by Offenbach. She wins a cash prize and the opportunity to perform with the North State Symphony in the 2022-23 concert season.

Second prize in the College/University Division was won by Cassidy Winkelman, cello, from Shasta College. She performed Elgar's Cello Concerto in E minor and wins a cash prize.

Congratulations to all our participants, and their instructors, for their excellent performances. 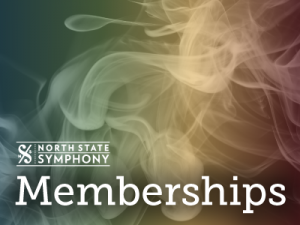 We introduced Memberships last year for our all-virtual season, as a way to stay in touch with you through a wealth of virtual concerts, interviews, watch parties, and more. Even though we're back to the concert hall for our 2021-22 Season, we hope you'll consider continuing to support us by becoming a Member. Members get lots of discounts and perks, and if you aren't ready to come back to the concert hall quite yet, your Membership will still get you access to all of our concerts and pre-concert talks, from the comfort of your home.

You can review Membership Benefits now, and purchase your Membership starting on July 17th.

Join us for our three remaining Masterworks concerts in November, February, and May at a special discount with our 3-concert mini-season ticket package! Now available at both box offices at the links below. Available only until Friday, November 5!

purchase in person:
1733 Market Street
hours: 11am-5pm, Tuesday - Friday
and 2 hours prior to events on weekends