Mendelssohn took a trip to Scotland and wrote the opening of the Hebrides Overture. Jean Sibelius was moved by a play by Maurice Maeterlinck and its themes of forbidden love, subsequently writing some of the most picturesque and charming incidental music. Maurice Ravel served in the French Army in World War I and later wrote Le Tombeau de Couperin as a gentle tribute to the victims of the war. Join us as we explore inspiration and its many forms featuring NSS's Principal French horn Robert Fant, and a special side-by-side with the youth orchestras of Chico and Redding. 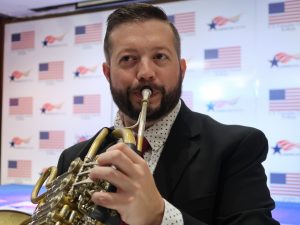 Dr. Robert Fant is a highly sought after teacher, musician, and composer who brings a world perspective to his work. He is currently the Assistant Professor of Horn at the Rudi E. Scheidt School of Music at the University of Memphis in Memphis, Tennessee. Previous positions include Assistant Professor of Horn at Southwestern Oklahoma State University, and Professor of Horn at MidWestern State University in Texas. He has regularly maintained a studio of private students during his performance career and strives to always inspire students to reach their goals. Robert spends most summers teaching children in India and performing around the country for a charity.

In Summer of 2019 after India, Robert traveled to Europe to perform the premiere of "Variations" at the 51st conference of the International Horn Society as a guest artist. During the conference Robert was a member of the Guinness Book of World Records largest horn choir record.

Robert’s performance in the United States, Asia, South America, and Europe has led to positions in orchestras, recitals, recording, and solo work. Previously he has held the position of principal horn with the London Chamber Orchestra (mozart), Atlantic Classical Orchestra, Teatro Municipal de Santiago, Guiyang Symphony, and section positions with the Philharmonie der Nationes (Berlin), Auckland Philharmonia, Verbier Orchestra, and the Symphony Orchestra of India. These experiences have led to collaborations with great conductors, soloists, artists, and an admiration of how music can change the world.

Pelléas et Mélisande, a play written in 1882 by the Belgian playwright Maurice Maeterlinck, was set to music by Jean Sibelius in 1906 as a concert suite of nine movements condensed from a group of ten pieces he had written previously as incidental music for the play in 1905 that also included seven interludes and a song. The instrumental suite was premiered a year later in Helsinki with an orchestra of flute (piccolo), oboe (English horn), 2 clarinets, 2 bassoons, 2 horns, timpani, percussion (bass drum, triangle), and strings. The themes of love, death, mysticism in Pelléas et Mélisande were irresistible as subject matter for other composers as well, e.g., Debussy, Fauré and Schöenberg.

Sibelius was born into a Swedish-speaking family in Finland. Although known as Janne to his family, he used the French form of his name, Jean. He graduated from high school in 1885 and subsequently studied law in Helsinki, but music was always his first love and his best subject at school, so he quit his law studies to study music at what is now the Sibelius Academy. Perhaps unfairly, he was branded as a musical conservative by his contemporaries as he adhered to the norms of the late nineteenth century in his music. Speaking as a composer he once stated, "Music is for me like a beautiful mosaic which God has put together. He takes all the pieces in his hand, throws them into the world, and we have to recreate the picture from the pieces."

The first movement, “At the Castle Gate,” serves as an overture to set the scene outside of a castle. We hear the sadness of the English horn over muted strings in the second movement as “Mélisande,” the heroine is crying by a stream in a nearby forest. The third movement, “At the Seashore,” portrays Pelléas and Mélisande in their first intimate meeting; here, imagine the basses as the currents of the sea and the woodwinds as the sounds of coastal life. “By A Spring In the Park” is a cheerful waltz as the couple dances, but still, there is a prescient ominous mood. The songlike “Three Blind Sisters”, originally sung by Mélisande to express her despair, is transcribed for woodwinds in this movement. Sibelius’ characteristic thirds can be heard in the woodwinds over pizzicato cellos in “The Pastorale,” as the violins soar giving way to the flutter of flutes to complete the peaceful scene. “Mélisande at the Spinning Wheel” brings a reprise of ominous undertones with recurrent trills from the persistent spinning of the fateful wheel. The sweet “Entracte” is said to express the growing love of Pelléas and Mélisande and the difficulties they faced. In the final tragic scene of the play, “Mélisande’s Death,” we can feel the heroine resigned to sadness and death at losing her true love.

Alexander Glazunov’s Rêverie for Horn and Piano, op. 24, written in 1890, features a luxurious romantic horn solo with a captivating melody. The tune is in an expressive flowing ¾ meter with hemiolas and ever-shifting dynamics over a large range of pitch. The quiet ending is to be savored. Originally written for piano accompaniment the orchestral version is far more colorful with 2 flutes, oboe, doubled clarinets and bassoons, timpani, harp and strings.

Glazunov was born in Saint Petersburg as the son of a wealthy publisher. He began studying piano at the age of nine and started composing at age eleven - how fortunate he was to have Rimsky-Korsakov as a private teacher! He was very accomplished on the French horn and as a precocious young student he composed his first symphony at only 16 years old. He performed in various orchestras as a young man, notably that of the Military Medical Academy in St. Petersburg directed by Alexander Borodin. Such was the context in which Glazunov composed Rêverie showcasing the extraordinary qualities of the French horn. He later became a professor at the Saint Petersburg Conservatory, and in the wake of the 1905 Russian Revolution he became its director; his best-known student was Dmitri Shostakovich.

Hunter’s Moon, originally titled “A Date with Diana” was composed by English conductor and composer Gilbert Vinter and dedicated to John Burden of the London Symphony Orchestra and first performed in 1942. The orchestral version calls for 2 flutes, oboe, 2 clarinets, bassoon, percussion, timpani, harp and strings. A cadenza-like passage opens this delightful work that leads us into a brisk 6/8 hunting melody depicting an inebriated hunter lamenting in his story of distress. The work then segues into a longing love ballad filled with jazz inflections allowing the soloist to soar until the hunt is over with a wild frenzied conclusion.

As a young man, Vinter was a chorister at England’s Lincoln Cathedral, and eventually served as Head Chorister there. He later became a bassoonist, and in 1930 joined the BBC Military Band, where he did much of his early conducting. It was during that time that he also began to compose, thus he is most celebrated for his compositions for brass band. During World War II, Vinter played in The Central Band of the RAF and later became the first principal conductor of the BBC Concert Orchestra.

The Hebrides Overture, also known as “Fingal’s Cave,” captures the impressions of 20-year-old composer Felix Mendelssohn travelling in Scotland with Sir Walter Scott. His inspiration for the Overture derived from a stormy crossing by steamship to the island of Staffa, where he visited Fingal’s Cave that Sir Walter Scott described as “…one of the most extraordinary places I ever beheld… composed entirely of basaltic pillars as high as the roof of a cathedral, and running deep into the rock, eternally swept by a deep and swelling sea, and paved, as it were, with ruddy marble… baffles all description.”

Mendelssohn employed the “concert overture” format that was novel in his time, but in subsequent years was popularized considerably by his influence. It would take Mendelssohn from 1829 to 1832 to get the Overture into its nearly final state, and after completing it in Rome in 1830, he dedicated to his father as a birthday gift. Two years later he edited the manuscript in Paris to capture more of what he described as the essence of “train-oil, seagulls, and salt cod” before the Overture received its triumphant premiere in London. A critic of the day declared that the composer had succeeded in capturing the “most northern part of Scotland landscape, on a wild, desolate coast, where nothing is heard but the howling of the wind and roaring of the waves; and nothing living seen, except the sea-bird, whose reign is there undisturbed by human intruder.”

The score calls for pairs of flutes, oboes, clarinets, bassoons, horns, and trumpets, timpani, and strings to blend the sounds of Scotland into a rich soundscape with the constant motion of the water represented by flowing layers of orchestration, and the haunting loneliness of the seascape in the descending low strings. A second, more expansive theme is stated by the cellos, brass and bassoon bringing even stormier episodes. The chaos of the squally mood develops until a clarinet duo and soft woodwinds restate the opening themes.

Le tombeau de Couperin was composed by French composer Maurice Ravel during World War I as a six-movement suite for solo piano between 1914 and 1917 based on traditional dance movements from the French Baroque. In 1919, he orchestrated four of the six movements into the work we hear today.

Traditionally a “tombeau” (“tomb” in French) is a musical remembrance to someone who has passed away. Ravel worked as an ambulance driver in the war and he wrote this piece to commemorate some of the lives affected by the war. Although a tombeau was most often written for one person, Ravel dedicated each movement to the memory of friends lost on the battlefield. Tombeau is meant here in the sense of tribute rather than mourning. Curiously, we do not hear the expected anguish of war in the music, but rather a peaceful simplicity – not really sad at all. Ravel felt that “The dead are sad enough, in their eternal silence.”

The work also serves as an homage to Couperin and the French Baroque keyboard style and dance forms. He features the oboe throughout the piece, but most notably in the solo that opens the work. He also makes use of traditional Baroque ornamentation and harmony as he adapts the orchestra to the dance forms that defined the era of François Couperin (1668-1733). His homage has a modern twist however, with its delicate layering of timbres, impressionistic dissonances and chromaticism, parallel lines, and sudden changes in energy and dynamic. The sophistication of Ravel’s sensuous harmonies shimmers as the instruments engage in beautiful musical badinage. Ravel uses only pitched instruments in this orchestration: two flutes (one doubling piccolo), two oboes (one doubling English horn), two clarinets, two bassoons, two horns, a single trumpet, harp, and strings.

In the opening of the Prélude, we encounter a fleeting dreamy feel often diverted by the unexpected, creating only impressions flowing one into another. The Forlane was a lively folk dance from northern Italy in the Baroque period that found popularity in the French aristocratic court in the early eighteenth century. Ravel creates and flowing dissonance by the asynchronous juxtaposition of the winds gently overlapping each other. The Rigaudon was both a folk and court dance for instruments popular in France and England; Ravel’s version is an exuberant duple meter dance in a lively tempo and full of surprises. The Menuet conjures a bittersweet beauty with just a hint of sadness. The oboe makes the opening statement amid Ravel’s swirling coloration, followed by silky strings and abrupt changes of timbre and harmony that finds its path back into the opening theme when the music pauses before woodwinds interrupt and the music fades into the final chord.